June 13th ~ The Mystery is Still Mysterious!
Yesterday the R4A was working for 4 hours and then suddenly the problem reappeared. This is awful --- so I turned the radio downside upside and with an insulated stick poked something (I don't know exactly what) and it has been working ever since.
When the shoemaker was in there with his soldering iron -- do we have a bad solder joint that turns intermittent? I did reheat many joints that looked pretty bad; but may have missed one or two. So It is now working but I cannot definitively say this was the problem and here was the solution.
I also had some reports that even though the R4A and the T4X are slaved to one  VFO that there may be a difference in frequencies. I am using a cable kit made for connecting the two units.
Now one report I am discounting and it sort of "pissed me off"! The Drake dial gradations are 1 kHz on the tuning knob and you could come visually close to reading 0.5 kHz; but anything else is a crap shoot.
So this ham yesterday on 40M was complaining that I was off frequency by 100 Hz. What a lid! Then he says he was not familiar with Drake equipment and that I should recalibrate the display so it was on (his) frequency.
Someone needs to put a straight pin in his coax and may his antenna get struck by lightning! 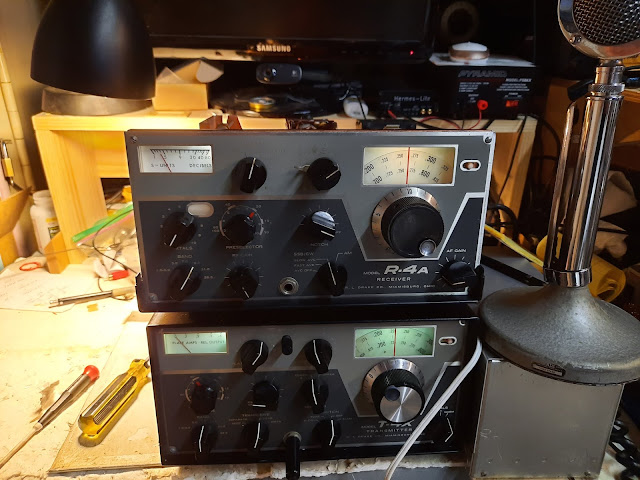 ************
Out of not so good things, good things do happen and the R4A/T4X sojourn is no exception. I had to learn a lot more about the R4A than I had originally anticipated.
An early 1960's design -- it is clever and innovative. Drake had an excellent engineering staff -- and the follow on TR-7 is a benchmark of engineering excellence.
I am surprised at the stability of the Drake PTO. Yes you heard me utter those words, But I have been thinking about how to retrofit a Si5351 in there somewhere.
Hope to use this pair next weekend for a back yard field day. How cool would that be?
73's
Pete N6QW
6/12/2021
The Problem may have been found = C107.
I had it running for 5 hours with the AGC fully functional and it did not drop out. There does not seem to be good reason why C107 -- But disconnecting it made it work. If it would short upon failure then there would be no AGC voltage and it should not work with the AGC OFF. But if it were open it should work as I simply lifted one end of C107 and it works. I will replace C107 tomorrow. For good measure I did replace C108.
This saga may continue; but for now it has worked for 5 hours with no hiccups. I did retouch a lot of the solder joints that had been touched by the "shoemaker". So maybe that was a part of the solution as well.
More Mysterious Stuff ~ 6/11/2021
Spoiler Alert --it is not C108!
So after fiddling all day yesterday there was no music at the end of the day. Had the garage door open as it was a pleasant day, yet I had no pleasant results. I got so frustrated that I hauled out my Fender Strat and played a few bars wherein one of the neighbor ladies who was walking by stopped and applauded and said you are a man of many talents. That only made things worse! Dumb me, why didn't I start playing the guitar in High School (alternative chick magnet)? Moreover, troubleshooting talents were definitely not working today.
When all else fails read the manual. So I pawed through the pile of papers I printed off and read about the AVC system 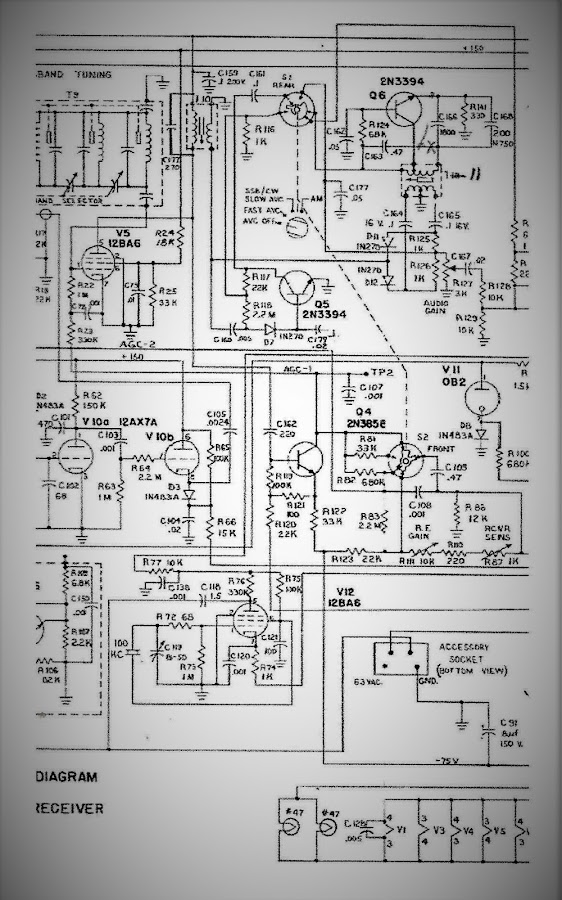