Let's build something with Vacuum Tubes.

With a Tip of the Cap to Joe Galeski, (W4IMP SK) I thought this rig which is a 20M Sideband Transmitter using only 3 tubes would be a fun project. The IMP is a minimalist transmitter using a homebrew filter at 5 MHz  and with a few tubes likely produced only a couple  watts. Yet many copies were built and put on the air. We are talking vintage 1950's.
I must also thank N2CQR for his suggestion to call it the PIMP.
October 4th Update.
More work on the PIMP. Wired up the 1st part of the Carrier Oscillator, Balanced Modulator, Microphone Amplifier and Filter today. Coming along nicely.

September 26th, Update
Screw the VXO! No matter what I did I could not get more than about a 5 kHz swing using two crystals. At the suggestion of my friend Grayson I reworked the VXO and turned it into a Hartley Oscillator  (you know where the tap on the inductor goes to the tube Cathode).
Boom -- it works and covers from 5.0 to 5.360 Megahertz.. Man talk about luck! Stability is like all Analog VFO's -- just don't breathe as the air currents will make it drift. The waveform could use some perking up but that will require a bit more evaluation. 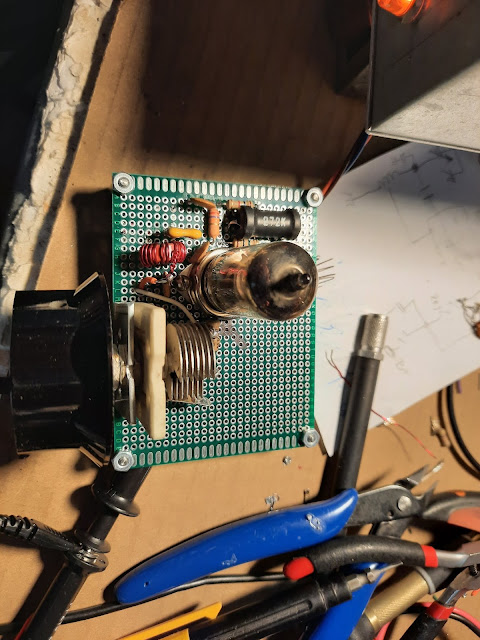 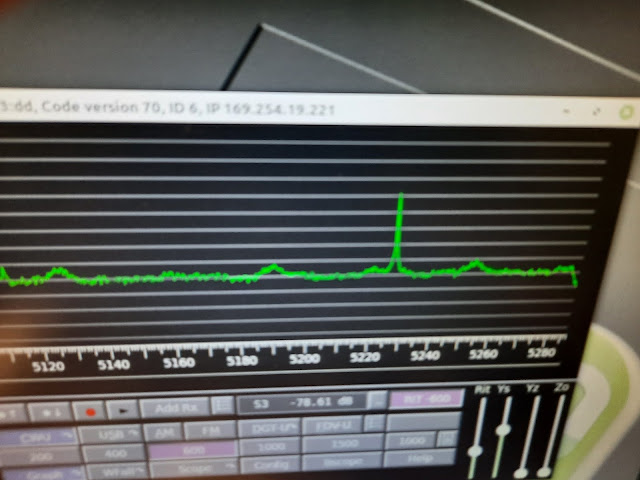 Who needs a Frequency Counter when you can read to 1 Hz?

September 25th, Update
Built the VXO today and and it is best described as working but not to my satisfaction! The 6U8A will oscillate on both frequencies but the Delta Tuning is like 3 kHz for each crystal.
Part of that smaller tuning range is the lower frequency (5 MHz) being used. I have some VXO's running at 23 MHz and 20 kHz is the norm.  So a bit more "diddling" required. But the output is strong and the sine wave looks OK. I listened to the signal by using my HL2 tuned to 60 Meters and the sound was clean.
Have tried different inductors (cores and inductance values) and not much changes. So that may be a huge blinking sign that other components are controlling the tuning range. Time for some noodling (and besides did solder my fingers together twice today.)
Any suggestions and/or inputs on how to expand the range would be much appreciated. Already I am thinking Si-5351 and the 6U8A becomes a buffer stage.
Time to think Bigger. Suppose you took the basic PIMP topology which is basically a three tube SSB transmitter and added two more 6U8A tubes for a total of 5 tubes. The two additional 6U8A's would do the following. The 1st 6U8A would be the audio Pre-Amp (triode section) and the Audio Amp  (pentode section). The balanced modulator on transmit is now the product detector on receive. This might require a shift to a diode ring; but unknown at this time and requires further investigation.
The second 6U8A would now become the Rx RF Amp (pentode section) and the Receive Mixer (triode section). Of course some relays in there too; but this looms large as a possible topology for a minimalist 20M SSB "tube/valve" SSB transceiver.
Wow, this could start a whole new wave of vacuum tube radio construction. Rex Harper, W1REX sells PCB boards that are made for tubes. Another supplier in Canada; but ships from the US called Just Radios has literally all the caps, resistors and other selected vacuum tube era parts. Antique Electronic Supply has tubes and sockets --plus a whole lot more. Hayseed Hamfest has electrolytic caps for the power supply.
We also need to think of a 20M hangout frequency something other than 14.285 as some may install an after cooker so not a QRP Radio. A 6DQ6B would make for an ideal 30-50 watt linear amplifier stage. 14.242 +/- and 14.262 +/- are possible hangout frequencies.
When I just started in Ham Radio in 1959 at age 18, the two watch words of the day were: Tubes and Boobs! Funny how some things never change!
September 24th, Update
Today I worked on a revised VXO design so that it would be turned into a Super VXO that is switchable between two pairs of crystals. This could give me maybe 20 kHz on 20Meters 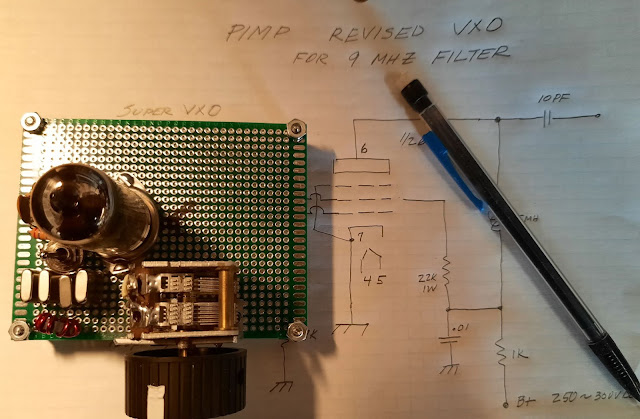 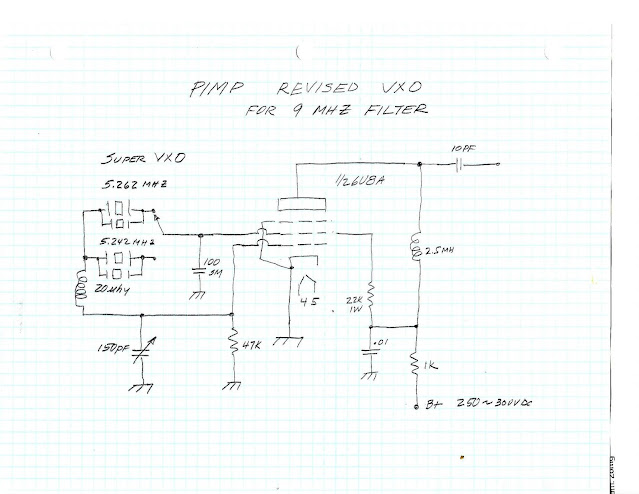 *******
My 2021 version will attempt some circuit changes to account for the almost impossible to find parts. There is an audio transformer specified I have been unable to find or I should say at something less than $100. I have a scheme to use a 600 Ohm : 600 Ohm Modem transformer than can be had for around $1 and that would be a break through. For a filter I have a commercial 9 MHz unit and for the VXO I have several frequencies in the 20 Meter band Phone Band. So maybe others would build this rig and we could set up a 20 Meter watering hole at 14.262 MHz
If so inclined to build a homebrew filter a frequency of 4.9152 MHz (like in the Elecraft K2) would be ideal to mix with a 23 MHz VXO for 17M operation. 17M FT-8 with a couple of watts is highly viable!
Construction would be on two small prototype circuit boards, with the 1st board housing the carrier oscillator, the Microphone amp, the balanced modulator and the filter. The 2nd board would have the VXO and linear amp stages. The 6CL6 could easily drive an outboard  single 6DQ6B RF Amp stage to about 50 watts output. Now we are smoking!
73's
Pete N6QW 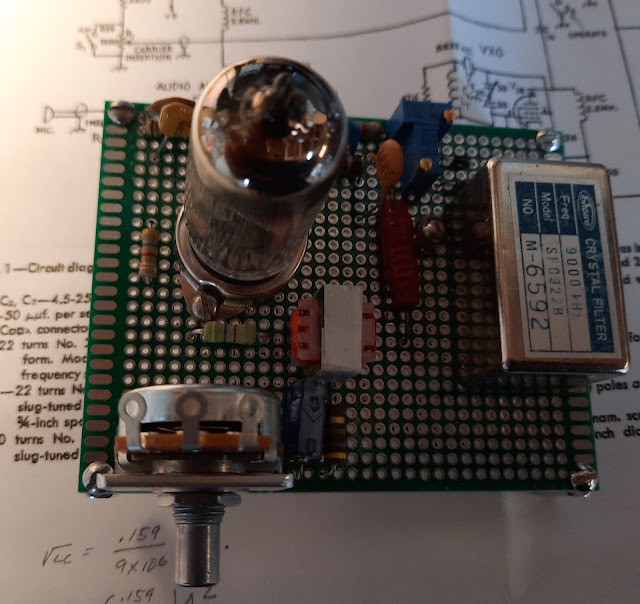 The early stages of a PIMP. 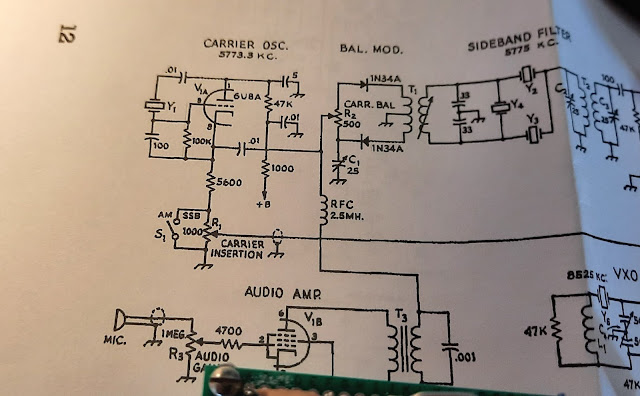 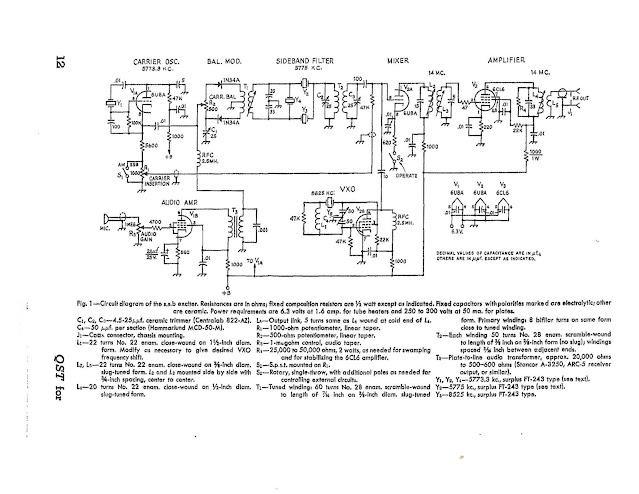