Using MMIC's in the PSSST Is Like Having a French Mistress!

The PSSST and the French Mistress

A very good ham friend in France when he saw yesterday's post sent me an email asking about MMIC's and how stable were they in ham circuits and in particular this circuit. The 20.5 dB gain (at 900 MHz no less) sure raised his interest level.
I always try to respond with questions like this using parables. This may be a good one! The use of MMIC's in ham circuits is like having a really hot young French Mistress! Treat her right and you have the best of all worlds. The wifey feeds you, washes your underwear and even makes your dental appointments -- well we all know what the mistress does for you. But treat the mistress wrong and then she tells the wife and you are now driving a 1972 Volkswagen Super Beetle and living in a one room apartment!
Yikes there really is a French Mistress!!!!!

The use of MMIC's is as simple as that and if you look at the hand drawn sketch you will see some small rectangles with dimensions. That is how the wife does not find out about the mistress! It is all about circuit layout and keeping the ins from the outs. Those of you who dabble in microwaves will recognize my crude form of strip-line circuitry.
My 1st cut with the CNC clearly showed that the spacing between the in/out pads should be slightly less than 1/10 inch as the 1/32-inch four flute endmill bit removed too much material. I revised the G Code to make that area 0.09 inch.
I am happy to report that the MMIC Steerable Amp is a win, win, win. The Guy in the parable is happy, the Mistress is happy and the Wifey feeds him, washes his underwear and makes his dental appointments! MMIC's are good! 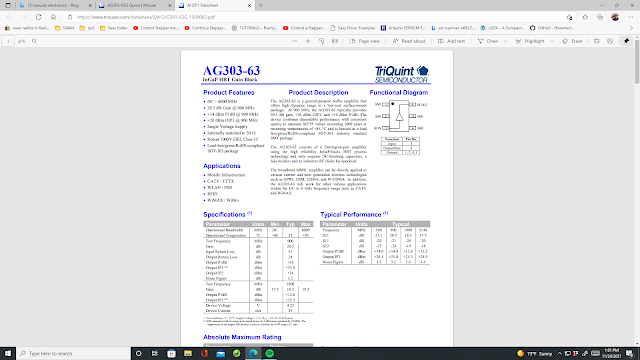 A Major Mod to the PSSST!

In a quest to be ahead of the curve and outshine The Tribes, today I installed an alternative to the single 2N2222A used as the Steerable Amp.
This stage (a 2N2222A) on Receive was the Rx RF Amp stage; but on Transmit it was the Pre-Driver. That task has not changed but now it is being done with the AG303-86G MMIC.
Why? Because I can and the MMIC only uses 5 parts and is inherently broadband with a Z in/out if 50 Ohms. The stage gain is 20.5 dB. 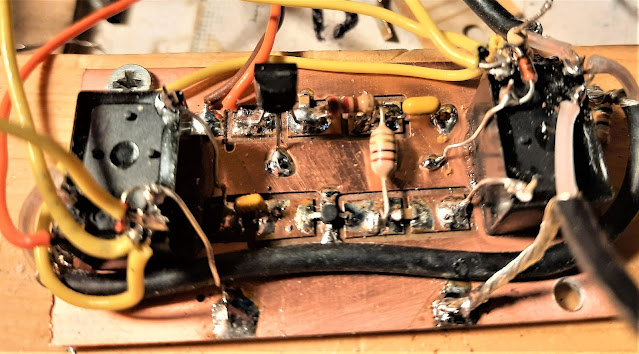 Late this afternoon I had a QSO with Chile. The operator was having a heck of a time copying me and finally he got my call straight and the report was 4X3. So, that was kind of weak. It was only then that I realized I made that QSO running only 4 watts! Bravo little PSSST.
This was a test and now I can sub the MMIC's in for the two 2N2222A's in the IF Module. This sets the stage for shrinking the size of the PSSST and maybe even some diode steering. 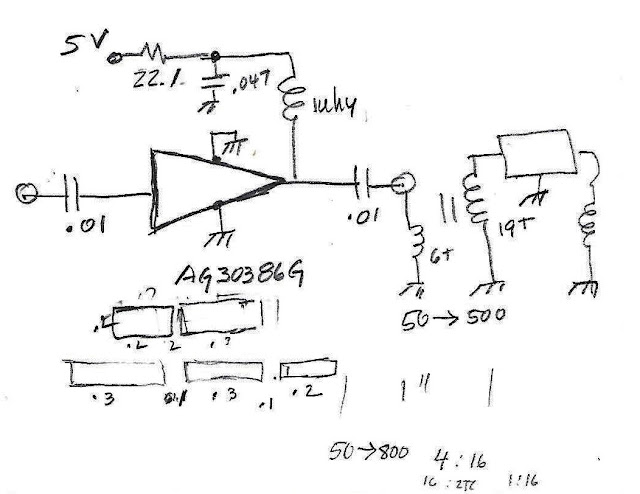