Showing posts from November, 2016
Show all

A Little Arduino Magic for the FPM5 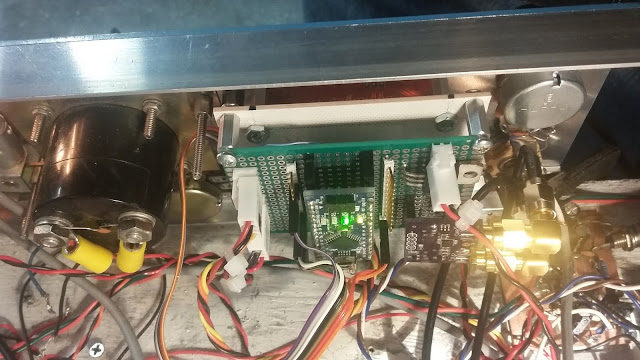 Adding some Arduino Functionality ~ FPM5 12/03/2016 ~ Update of Progress on the FPM5 I should start by saying that I have been receiving a lot of world wide input on my "clunky" solution to changing bands and having the display read correctly. In quick review my "clunky" approach was to move the band switch to the band of choice and then hit a momentary Push Button and Shazam! the display would read correctly and as a bonus the correct filters would be selected. The inputs received were in the "bowling lane" of simply move the band switch and the display will read correctly. I used the term bowling lane to reflect a large path of approaches versus a narrow line.   Some suggestions worked, others didn't and some worked better than others. The root cause is that I am using then analog pins for the band switch input. As the Oracle of Italy and one of the founders of the Arduino project, Massimo Banzi stated in his tutorial "you could read
Read more 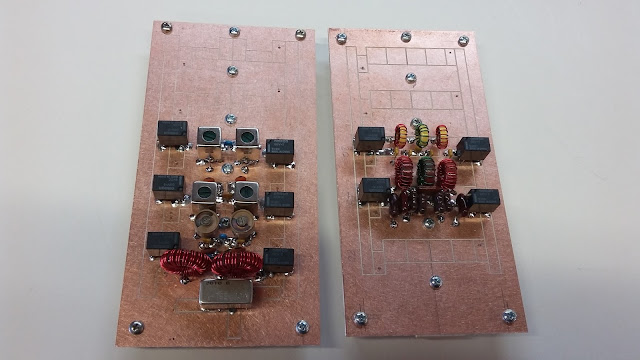 Failure into Success!!!! Having a CNC Milling machine in one's garage is a blessing and a curse! I built two new boards after a quick design using G Simple only to discover I made a serious errors on the BPF and LPF boards for the FPM5. On prior similar boards there was a continuous ground plane something which I forgot when I redesigned the two boards and now I had many isolated islands which should have been part of the topside ground plane. The blessing is that you can make boards quickly --the curse you might have to redesign the board.   Well enter innovation and my resolution was that I connected the isolated islands to a common ground plane on the bottom side and thus won't have to remake the boards. Today I completed three bands of the BPF and two band on the LPF. These can be seen on the photo below. The 42IF123 transformers do not work too well as a 75M BPF and so this filter was built using discrete components. The filter was 1st simulated in  LT Spice and the
Read more 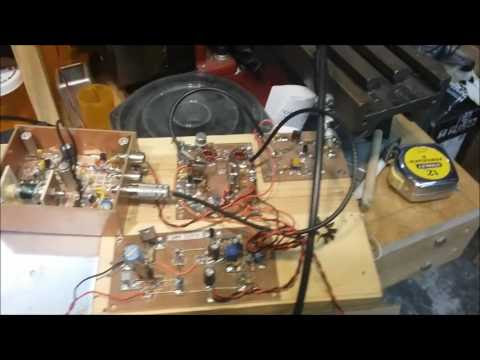 Heading into the Final Stretch! 11/20/2016 ~ You Tube Video of a working Analog VFO     73's Pete N6QW﻿ ﻿ 11/19/2016 ~ Analog VFO's Yes Virginia there once was the Analog VFO which today has largely been supplanted by DDS and PLL chips. Bill, N2CQR conducts a monthly podcast (soldersmoke.blogspot.com) where I just ride along and join in on the banter. Bill is a strong proponent of the Analog VFO's while I tend to the PLL and DDS variety. Bill frequently reminds me of our different views almost to the point suggesting that perhaps I forgot how to create such devices. So just in case any one else has a similar view...  I will be posting a youtube video of the VFO in action.     This VFO uses a high power transmitting cap and tunes a 200 kHz slice at 5.2 MHz --good for use with a 9.0 MHz IF on 20 or 75 Meters. Pete N6QW 11/18/2016 ~ 1st Mixer and Band Pass Filter Board In preparation for the integration into the case, I designed a combination
Read more
More posts