Showing posts from May, 2017
Show all

Transceiver Architecture 2.18 The Final Filter   6/3/2017 ~ A definition of Covfefe: Running the same exact test on the same piece of crap will change the outcome!   My question is why is there only about 25 dB difference is the peak response and the rejection? The bandwidth looks about 2.2 kHz but the ultimate rejection looks poor. I would feel better about the results if there was say a 45 dB difference in the peak response. The shape looks fairly flat but not within 0.2 dB as predicted by Dishal for a 127 Ohm termination. I can only reflect that what we have going here with the Dishal approach is much like the touted Gas mileage is indeed YMMV!   Pete N6QW   ﻿   6/1/2017   I have received a private email from someone who knows and they have shared that my disappointing results with the Dishal Filter possibly is linked to Covfefe. I surely hope not but this malady may be affecting a lot of electronic failures from now on and for the foreseeable future.
Read more 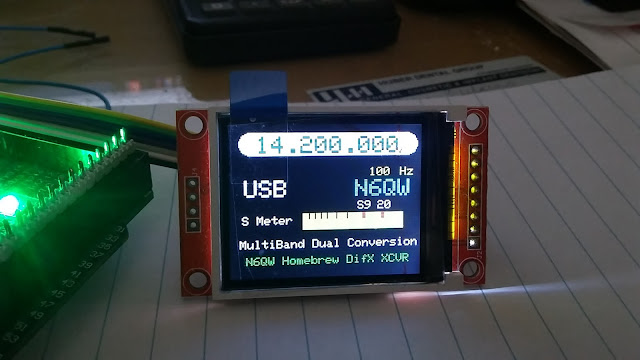 Transceiver Architecture ~ 2.17 [For more info on the LM373 SSB Transceiver see http://www.n6qw.com/LM373.html ) ﻿﻿ ﻿ Reworked Color Display for the Dual Conversion DifX   The Crystal Filter Build Out   5/25/2017 ~ Where "Noodling" pays big dividends.   Yesterday I made a "linear layout" of the six pole crystal filter and the result was a series of 11 pads where the crystals and caps would be installed and that assembly was about 6 inches long. This is an unwieldy dimension to handle inside of a compact radio. Then I spotted a photo of an 8 pole filter as used in the Elecraft rigs and saw how they had compacted the build. So that led me to think a smaller footprint. I now have come up with a compact version that get the footprint down to something like 2 (or 3)" X 4" inches --much more accommodating. I also had concerns about signal leakage between the sections of the compact layout and think that can be fixed by the addition of a sh
Read more 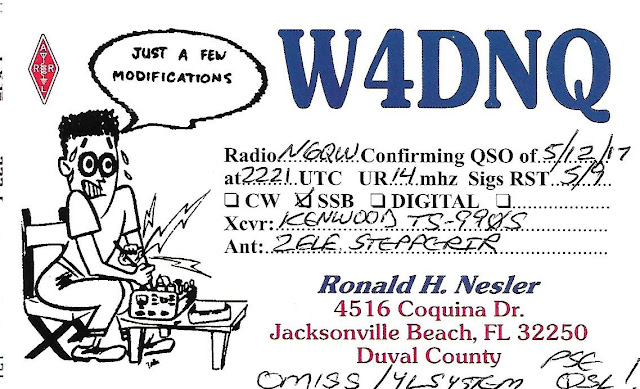 Transceiver Architecture 2.16 5/21/2017 I am now documenting the LM373 build on my website so see the following LM373 Link  So for those tired of seeing me gush over my vintage 1970's designed, new rig you will have some relief. Have made about 2 dozen contacts including some at 600 watts. You got to have power to make lots of contacts so get over that QRP stuff! Soon we will be back to the crystal filter build on the DifX.   73's Pete N6QW 5/19/2017 ~ QSL Card from the 1st contact with the LM373 Transceiver. Here is proof! Also noteworthy I was running only 15 Watts and the Mosley 2 Element Beam. What fun! I am now up to 10 Contacts with the LM373 Rig. Pete N6QW   ﻿ 5/17/2016 Some added photos of the innards of the LM373 rig. We have now made six contacts with the new rig. I still need to tidy up the wiring. Yes, I succumbed to an IRF510 in the output which is not my favorite RF device --but it was an expedient. I am redeploying the K5BCQ 5 Watt final
Read more

A New Line Of Transceivers ~ DifX 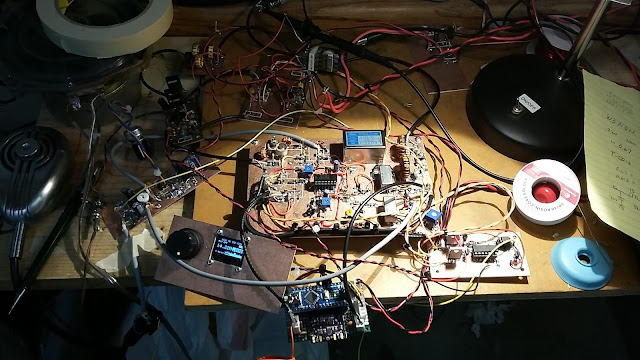 Transceiver Architecture 2.15 News Flash --- The LM373 SSB transceiver is on the air and the 1st contact was with W4DNQ, Ron who is in Florida. The contact took place at 1525 PDST on May 11, 2017 on 14.220 MHz. Here it is "al fresco" Lets Build the 11.5 MHz Crystal Filter ~ Part III   I re-measured the 9 candidate crystals using the G3URR oscillator only this time using the 1 Hz position for fine tuning on my SDR transceiver. The field is now down to 6 crystals with five of those being exactly the same frequency in the loaded state and the 6th is only off by 5 Hz. As we used to say when I worked in Aerospace --Close Enough for Government Work!   So now I was ready to go back into the Dishal Software and using the new data, I  re-plotted the curve for 6 crystals. Again the setting of the Band Pass ripple materially affects the Z in/out and the capacitor values. Less of a ripple translates into a Lower Z in/out. So there has to be some reasonability (trade-of
Read more 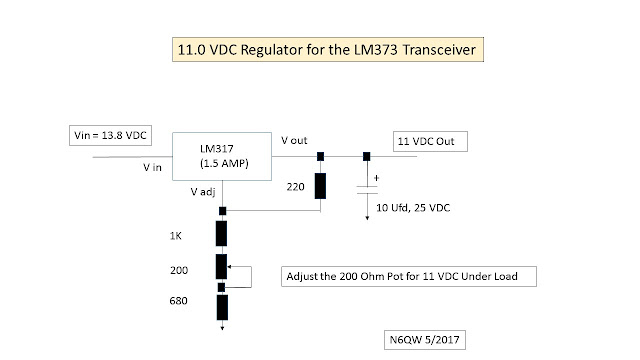 Transceiver Architecture 2.14 Back to the LM373 SSB Transceiver. While I take the time to re-measure the 9 crystals for the Dishal Filter, I thought I would update the LM373 SSB Transceiver project. This rig qualifies as a DifX as it is not a Bitx and the subject matter that will be covered has direct applicability to the DifX Dual Conversion project.   W5BAA's LM373 SSB Transceiver (Ham Radio November 1973) used 11.0 VDC as the supply voltage for his rig. If you look a the photo of his rig in the article you will see it connected to a 12 VDC Gel Cell. So connecting the dots, this gave him some lee way as the Gel Cell discharged. My evaluations of his approach actually demonstrated that his design did indeed "love" 11 VDC and so I followed his direction.   But now you have to have a source for 11 VDC (at least for the lower level stages (which is most of the rig) and you also needed a means of efficiently switching 11 VDC to the steering diodes to change th
Read more 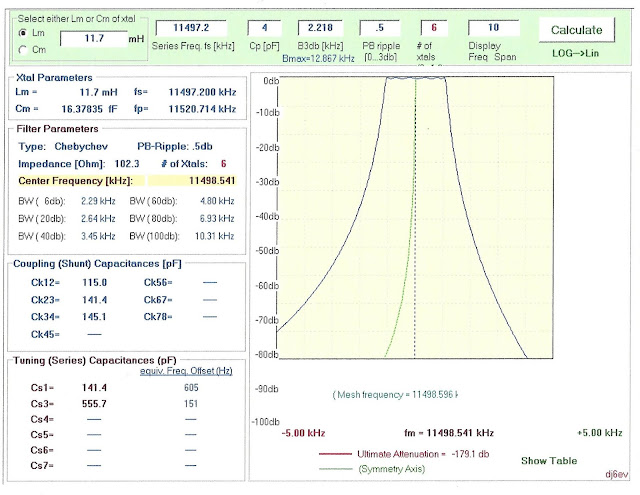 Transceiver Architecture 2.13 Lets Build that 11.5 MHz Filter Part II   In Part 1, (2.12) we shared how we measured all 25 crystals and found a grouping of 9 that were essentially "carbon copies" of each other. I never play the lottery because of that exact situation. I suspect all lotteries are rigged and the likelihood of having nine exactly the same crystals is somehow rigged. So the first thing I will do is to re-measure all of those nine in hopes of finding 6 out of that batch that are exactly the same. That may happen yet today.   So once you have the crystals and the two frequencies that were measured on the G3URR oscillator proceed to the WA5BDU tutorial on how to calculate Lm and Cm. I made an assumption that the crystal holder capacitance was 3 PF --probably not good or bad. Regardless, using the equations provided by Nick Kennedy I found the Cm to be 16.356 Femptofarads (10 to the -15) and using that value you can calculate the Lm which is 11.7 MHy.
Read more 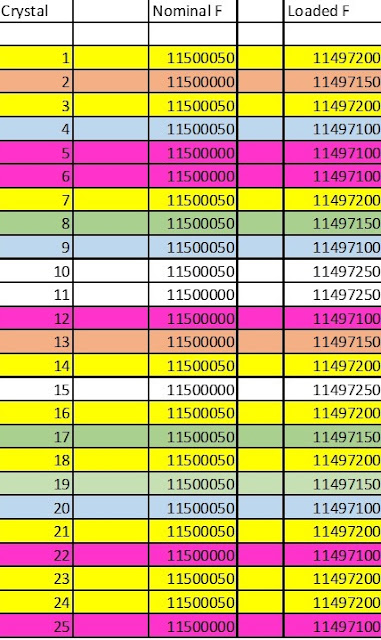 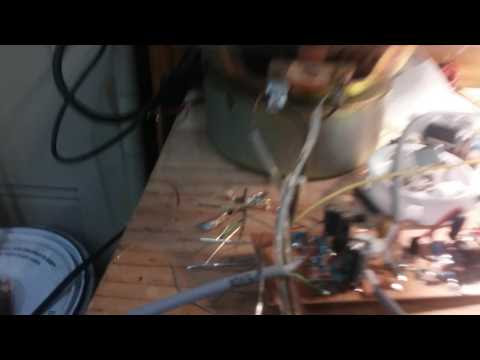 Transceiver Architecture 2.11 5~04~2017 1St Transmitter Tests of the LM373 Transceiver. Pure Joy. ﻿ A Way Forward is to Look Back. Soon it will be time for another Solder Smoke Podcast (#196) and Bill, N2CQR and I hope to spend some time on "Old Time Homebrew Transceivers". Not necessarily that the transceivers themselves are old for they are both new; but that they involve older technology. BTW this is the 3rd year that I have been doing the podcasts which started with #161 in May of 2014.   [I am taking a short detour from the dual conversion DifX as I await my bag of twenty five 11.5 MHz crystal to arrive and then I will share (using Method #4) how I built the filter.]   In SS #195 I casually mentioned that my first solid state SSB transceiver used an amazing single IC from National Semiconductor (now a part of Texas Instruments) called the LM373 and that was in the early 1970's. My rig was on 20 Meters. My first introduction to this device was from
Read more
More posts