OCTOBER 5, 2020
The title regarding a Handful of Dynamite is most appropriate today October 5th, 2020. Up until today I had not had the transmitter working other than to discover it would only put out about 250 milliwatts. It is appropriate in that if I had some dynamite I probably would know where to stick it (get it: a stick of dynamite).
There is an overly discussed Q5 Modification where you completely short out this transistor and remove a 100K resistor (R28). This now pops the output to close to 5 watts. That was a huge improvement in RF output.
But all is not well in OZ! When you key the transmitter you get and small RF output and then a significant output on voice peaks. But the output with no modulation is like in a Filter Rig when the carrier is not fully balanced out or when you have the bias level set too high on the IRF510.
In the menus for the uSDX there are three transmit adjustments you can make and they are : Tx Gain (nominally set at 4) and a Minimum bias setting (nominally set at 40) and a Maximum bias setting (nominally set to 140). I set all of those parameters prior to the first transmitter tests. When I saw the RF output with no modulation adjusting those did make some change but it did not make the reading go to zero!
BUT the real problem on transmit is that the signal sounds terrible! Adjusting those three parameters so that the RF out with no modulation is reduced, simply exacerbates the bad sounding signal at the nominal settings. I have to read up on the thousands of posts to see if this has been fixed.
But I did find that on CW not so much of an issue because there is a simple on off. If you set up operation for VOX--then there is only signal out when you speak which eliminates the RF out  with no modulation.
BUT AGAIN Even with VOX --it sounds like crap! The uSDX probably OK for CW but with what I have now I would not use it on SSB until this issue is resolved!
I will now spend time researching the postings and documentation to see if it can be cleared up. Class E used on SSB maybe is like putting a supercharger on  VW Beetle --still a VW! I am disappointed --where is that stick?
73's
Pete, N6QW

Today I had a chance to exercise the uSDX in receive and was impressed at how well it hears and the built in functionality. I only got it working on the receive this morning and still think there is an issue with the microphone jack -- it may be internally shorted and was always showing being in transmit before unsoldering. 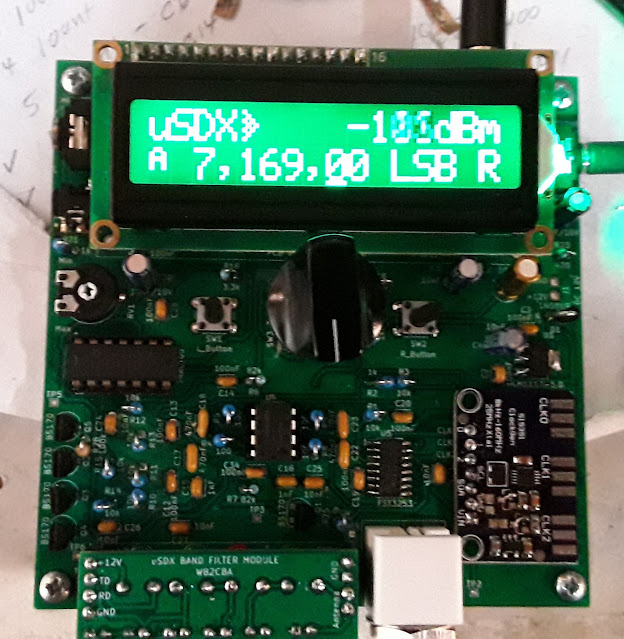 Unsoldering the jack from the board made it work and if you plug in a microphone -- without touching the PTT it is in transmit. A clue here. So I need to order and new jack (maybe two). I will also order a high quality Bourns Encoder and better tactile PB switches. Also need to get some 4" long M-F jumper cables. This will then give me the option of having a front panel.
A lot of posts about having trouble with transmitting --so before I do any transmitting I need to find the setup for transmit and then create a cheat sheet on all of the settings (like the bias settings). I have only built one LPF and I ran short of T-37-6 cores. I have all of the caps for four bands but not enough cores. So the next band will be 20 Meters. So a little more money to be spent at W8DIZ.
You want SDR -- then get a uSDX. If you crave a waterfall get connected to the webSDR sites and you can have waterfalls until the cows come home.
73's
Pete N6QW