Today we have a post about an exciting new 60 Meter transceiver from N6QW and of course it is a DifX. The 60 Meter band must be the world's best kept secret as operating on this band is like a breath of fresh air. With but five channels it would seem to be almost a non-starter. But that soon will change with the addition of more channels.
The 2015 WARC approved the new channels and effective January 1, 2017 they are indeed a reality BUT and double BUT so far they have not been actually authorized by the FCC for use in the USA --
Essentially the new channels center around what is now Channel 3 [5.357 MHz] and includes specific allocations for data and CW as well as specialized applications. But the bulk is for USB operation. Essentially Channel 3 is expanded by about +/- 7 kHz with the reasoning that you end up with 4 additional USB channels. But that also comes with a price of a power limitation of 15 Watts ERP. While not a problem for the QRP enthusiasts, already you hear grumbling from the California Kilowatt stations who always run 100 watts (Only 100 watts?). One recently heard QSO on 60M revealed the op might be running 350 watts --so he could be heard. Hmm what happened to 100 watts into a dipole?
I am very  aware that avid homebrewer's like Bill, N2CQR and Don, ND6T have successfully moved a VU2ESE Bitx40 to 60 Meters and we say a huge Congratulations and Bravo to Bill and Don. Thus the legacy of the Bitx lives on and embodies VU2ESE's concept of making the Bitx40 a springboard for hacks and changes. The changeover to 60M involves minimum surgery to the Bitx40 board thus that will make it a real incentive to get on 60M.

Keep in mind $59 buys you a nearly complete transceiver and at that price, two radios for around $120 would give you optimized radios for two of our ham bands. Making the high power modifications (to 20 Watts) would certainly make the radio easily heard out to the 1000 mile range. But that power level would have to be scaled back when the new regulations go into effect. (Well theoretically as probably some hams might just ignore the law --like running 350 watts.)
But I wanted more from my 60M endeavor and thus the N6QW rig is scratch built and not a modified kit. Again I want to stress that there are other designs and  features available to the homebrewer which are not found in the Bitx40 board and thus my approach was to not cobble up the Bitx40 I previously built. Let us explore these additional features that are found in my DifX. A good place to start is the display as shown below: 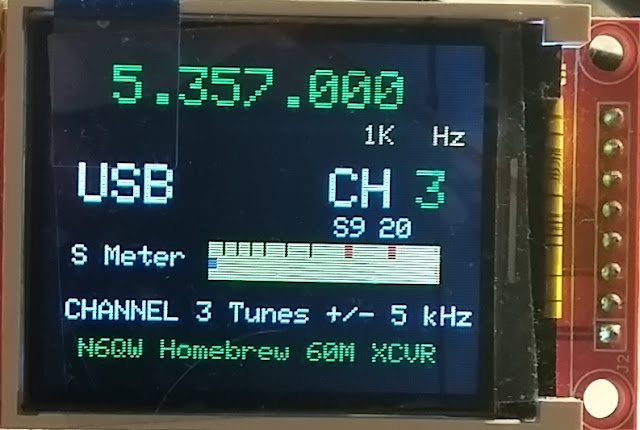 Starting with a 160 X 128  Color TFT display enables the homebrewer to show a lot of information. At the very top is the channel frequency, the actual channel number, the mode of operation (LSB/USB is panel selectable) an S Meter and some additional functionality such as  TUNE function and a reminder that channel 3 is tunable the +/- 7 KHz It is the only one and built into the code. To be safe I set my band swing limit to +/- 5 KHz. When the rig is placed in TUNE the word TUNE appears in red on the display right between the USB and Channel Number. It is a pulsed 988 Hz  tone and lasts for about 10 seconds.
This is a photo of the front panel as of March 22, 2017. 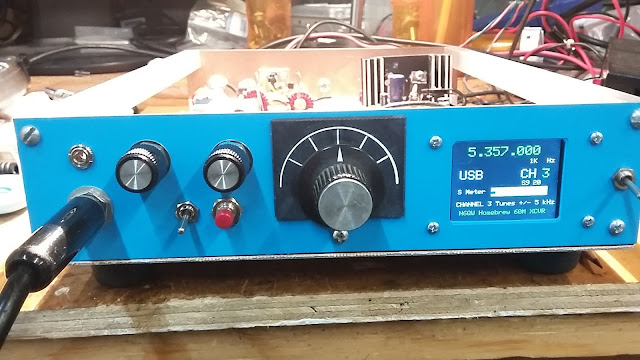 ﻿
[So OK the dial plate, black with white fill, is a bit of overkill; but since I have a CNC mill just wanted to show off what  about 15 minutes of work can do to dress up your rig. Next I will work a bit on engraving programs, as it would have been nice to just engrave the whole front panel. How cool would that be -- a DifX with an engraved front panel? ﻿

Starting at the left the small phone jack is the audio when using headphones and below that is the standard microphone jack. The two smaller black knobs are for volume and to the right of that is the encoder that only works on Channel 3 to tune +/- 5 KHz which is the SSB portion of the proposed allocation. The toggle switch below the two knobs is to select USB/LSB and the red button is the Tune button. The large knob in the center selects the 5 channels. An additional feature is the installation of a small miniature toggle switch to the right of the display and its purpose is MOX operation. For the non old timer MOX was a way of turning on the transceiver manually like in Manual VOX = MOX.  While this DifX does not have VOX (neither does the Bitx40), but that is something that could be added in a future iteration. That is a project for later this year.
This rig was originally on 40M and I modified it to work on 60M. I am sure glad I did.
By way of recap this DifX features include:
For those who would ask, the architecture is not unlike what was found in the Let's Build Something (LBS) transceiver that was showcased in a two part article by Ben, KK6FUT and myself in QRP Quarterly. It is also a very close cousin to the Big Kahuna. BUT it is a DifX!
In several days of casual operation, starting last weekend,  where I was actually just on the air testing of the rig, I made fifteen* contacts with stations in California, Nevada and Arizona. The best DX was 400 miles and the signal reports were excellent. I should mention that some advice given me was to get an amp so I could register 40/9 on their S Meters and that using my droopy dipole was not optimal.
But hey I was fully copied albeit only S5 and the audio quality was quite good --but not 40/9. Most of the contacts were on Channels 3,4 and 5 and a couple on Channel 1. Channel 5 is the DX channel and where I heard the stations in the mid-west. Channels 3 & 4 seemed to have the PSK operations. But that may be just the left coast.

Imagine my surprise that in the early evening hours I was hearing station out past 1000 miles in the heart of the mid-west. If they were truly running 100 watts, then there is a real possibility of nabbing one of these stations for a QSO with my puny S5 signal. Most had pretty good antennas and so that is the other half of the equation --got the rig now need a better antenna.

There is yet a bit more work on this 60M rig, mostly on the S Meter sensing circuits. Are homebrew rigs really ever finished? The Arduino code really adds much to making this work on 60M. One of the 60M stations worked almost harkened back to the 40M Police using SDR radios to somewhat "pick apart" your homebrew rig creation. However in this case the report was from the station using one of the smaller versions of the Apache Labs SDR who stated "your spectrum looks clean". Now those are words I like to hear!
This is a DifX!
73's
Pete N6QW
*W6ANR (3), K7RFI, N7GZZ, N6FUZ/M, WB6PGJ, WB6JNN, K6DNS, WA6JBZ, WA6KDW, W6DAX, W6PJD, W7IRS, KM6CQ. Locations include Placerville, Reno, Carson City, Visalia and Yuma.
﻿
﻿
﻿