https://www.n6qw.com/PSSST_20.html
With only 7 transistors I keep being amazed by the performance of this Jewel! Yes, it is like a Crown Jewel and I regret not using the Steerable IF Module (shown below) in other projects. This will now become a staple of future projects.
[ November 13, 2021. I now think you can do it with SIX (06)  transistors. If we steer the Mic Amp with two more relays, we now can also use it as the Audio Pre-Amp as it is exactly the same circuit. Scroll to the end. So OK the challenge --can we do it with just 5 Transistors?] 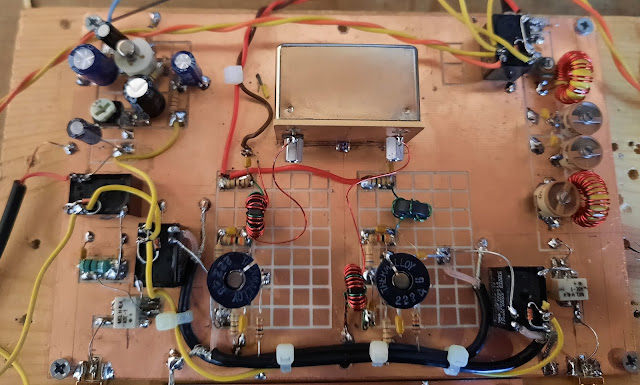 Here is what makes this unique and it wasn't until I made a block diagram that I realized the impact of the design. 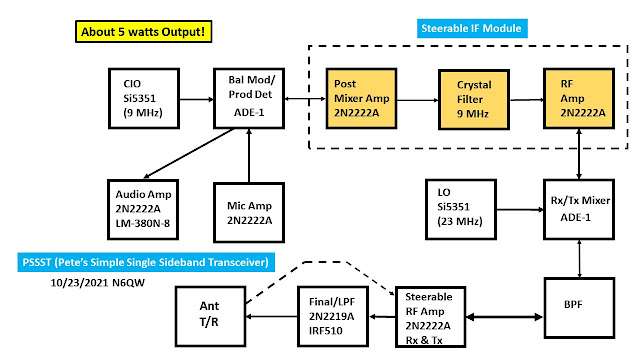 The initial thoughts on this IF Module were that it would be steered between two ADE-1 DBM's depending upon whether it was receiving or transmitting as shown below with the ADE-1's. In Receive, the signal is steered to the input side of the IF Module from the Rx Tx Mixer stage wherein the output side is steered to the (left) ADE-1 which is in the Product Detector mode and on out to the Audio Amp. 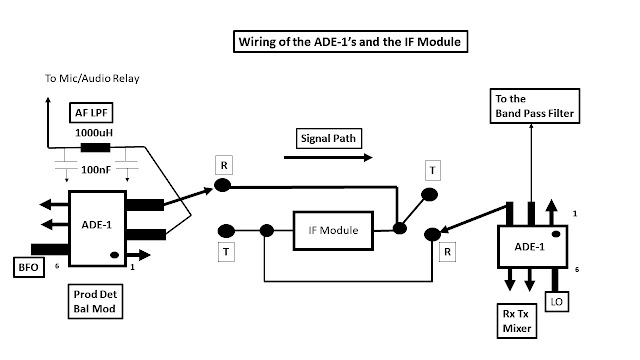 Switching over to Transmit the signal from the LEFT ADE-1 is now an DSB signal as that ADE-1 is now in the Balanced Modulator Mode. The output side of the IF Module now a SSB Signal is passed on to the RIGHT ADE-1 where it is mixed with the LO and on to the BPF.
So, what is significant is that the 1st Transistor in the Module is always a Post Mixer Amplifier and the 2nd one a pure RF Amp. The 1st is always seeing the same loading and a clue that the gain levels of the two stages will be different and are. This is where LT Spice enables you to "twiddle" with the parameters and for the whole assembly the gain was optimized. Of concern too was the gain of the stage for receiving and transmitting so that signals being received and transmitted were consistent.
I have extensively documented this project and in hindsight that was a terrible mistake and here is why I should not have done it! Too much documentation perpetuates the loss of creativity.
Many homebrewers and blog readers simply want to have all of the data including schematics, part number lists, Arduino Code, PC Board Layouts, LT Spice Simulations and performance calculation and need I say it URL Links to Source Suppliers. If it were possible, they would want me to build it too. (I have been asked in the past to do that.)

I do appreciate how documentation can help facilitate the construction of a project. But my fear is that thinking that this would encourage potential homebrewers to take the leap it in effect discourages creativity. Building it like Pete may not be the best mousetrap. Certainly, there are a few who may move beyond that but that is the point they are the few and truth be known they would probably make that move regardless.

Help is one thing enabling laziness is another. As I said before give me a schematic and my “fabrication process” kicks in to make the project a reality. An extensive documentation of a single project is not an inherent fabrication process to enable taking on other projects. The documentation of a single project is simply a by-product of the process –not the process itself.

Let me continue on my soapbox. I think in Modules and that is key to my fabrication process. Those who only want spoon feeding have missed the power of the module which is of course chunking a project into manageable pieces. With this process you can test as you go and downstream when you want to try an upgrade you deal with just a module and not destroy a whole radio to make one improvement.

From my perspective the documentation created for the PSSST is spoon feeding how to build it! Removed from that equation is an underlying process with the modular approach. Regrettably extensive documentation does discourage creativity.

Steerable modules have been used by me for some time which caused me to get hate mail about the use of relays and why not diodes. Diode steering has been used by me but my concern is signal isolation. That said the Steerable IF Module (not just the Filter) is a 1st for me and it works.

There is another pet peeve -- despite the Herculean effort to create and include all details I still get emails --Why do you not connect R8 (50 Ohms) in the hardware but LT Spice shows R8. LT Spice also had a note R8 is a load used in the simulation; but not connected in hardware. I hope that guy gets a short in his coax! Documentation enables Laziness! 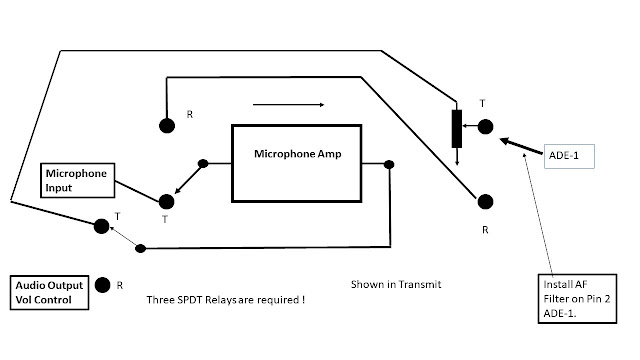 September 02, 2022
The Next Project... A 2022 Transceiver. 10/10/2022 My Apologies. It is with regret that I will be terminating any further work on this project. My caregiver duties have over time become a greater time sink and it is almost impossible to build something working only 10-15 minutes at a time spread out over a day. I apologize for not getting it from design ideas to complete hardware. Most likely I have built the last transceiver I will ever build. Thanks for riding along. My website https://www.n6qw.com/  has the pdf of the postings and I will leave this blog page as is. 73's Pete N6QW 10/05/2022 Still Alive! Regrettably my caregiver duties have overtaken any free time so not much progress. But I am hopeful yet this week I will cut at least one board. A PSA from N6QW.  Think of it like Mary Jo has a "crink" in her back and unable to get in the backseat of the 57 VW Beetle. A bit of a setback but not forever.  Seems like the hired caregiver had a small emergency and not able
Read more

January 09, 2022
Building a SSB Rig (Radio) in 2022 [A word Document of this total posting can be found here   PLEASE NOTE this opens to the home page of my website and staring right you in the face is a LINK to the document. The link is "How to Build an SSB Transceiver with a Date".  As I update the document, I put the date in the link so you know as of what date -- today the link will change to January 31, 2022] Updated 1/31/2022 ~ The Final Capstone. The above photo is of a Tri-Band Solid State version of the Heathkit HW-100/HW-101. It uses the SSB Filter, BFO Crystals and the Heterodyne Crystals straight from those radios. The rest is N6QW magic. You can read about this project on my www.jessystems.com website. Even the panel meter is Heathkit. BUT the PTO is from a Ten Tec Triton IV. An added touch -- the LCD Display. But this photo is a constant reminder that when you are at this stage is NOT the time to think about an enclosure to house all of that hardware! Regrettably it was an after
Read more