Updated 1/17/2022 (Info on the Amp stage)
Below is a Page from the Flex Radio SDR-1000 SDR Transceiver Manual. First to be noted is the Band Pass Filter Network. It would be nice to simulate one in particular filter that essentially would pass the band from 10-24 MHz (30M - 15M). The second piece is the op-amp device (OPA2677U $6.50 @Mouser) that would produce 1 watt output. Lots of possibilities for inclusion in a homebrewed transceiver project. 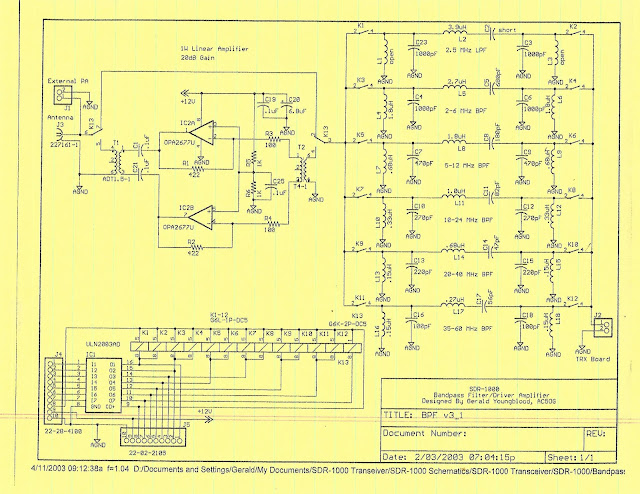 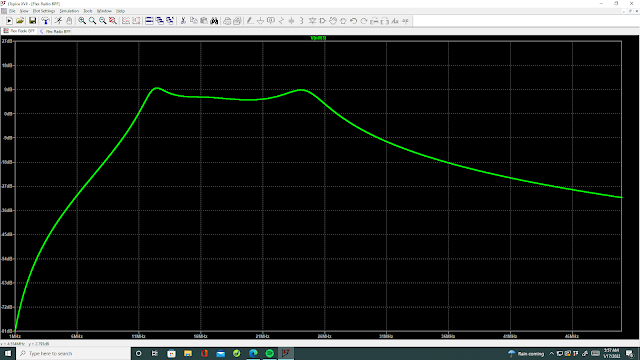 A quick and dirty plot of the 10-24 MHz Filter. This might be useful in future projects. 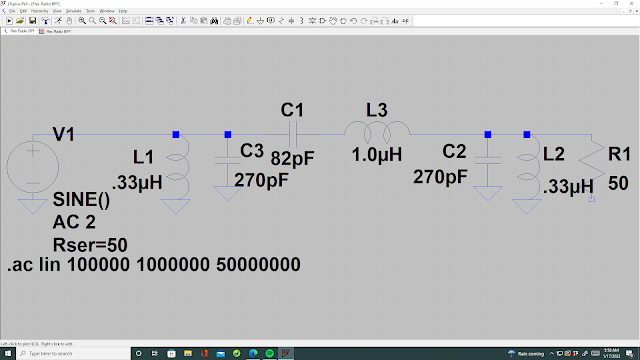 Now you should put this in LT Spice and do a little analysis work on your own. Changing R1 (only used for the Simulation) to different values seems to have little effect on the shape or BW of the plot. However, the R series in the generator does dramatically shape the plot insofar as flatness and bandwidth. Try it and then get a really warm feeling in your undershorts that MATCHING is important!
The OPA2677U is a SMD Op-Amp part containing two amplifier stages in one package. The Zin/out for each stage is 50 Ohms and good to 200 MHz. READ the datasheets! Nice!
Now some matching transformers are specified for the input and output to the amplifier block. For the Input side it is 4:1, and on the Output is 1.5 to 1. So, what are the transformers? A 4:1 can be 12 Turns and 6 Turns. (144/36 = 4) and the 1.5:1 can be 11 turns and 9 Turns (121/81 = 1.49382716:1) But the biasing resistors must be exact --No substituting and 1%. BTW you can check the 6 turns (12.6 uHy) to see what its impedance is at 24MHz and 10MHz -- 1900 Ohms and 792 Ohms --so OK in relation to 50 Ohms. [This is about circuit loading.]
Updated 1/15/2022
In our last Blog posting we talked a bit about the ubiquitous homebrew Crystal Filter; but now how to transition that filter into a radio. I can rightly say having built stuff since the early 1950's much has changed about the homebrewing mentality.
Firstly, who can accurately describe the Sideband Inversion phenomena? Concepts such as this are key when you scratch build a transceiver as often this drives the design and functionality. With the proper choice of a Filter IF frequency only one BFO frequency is required to deliver USB on 20 Meters and LSB on 75 Meters -- like a two-band freebie.
So, what is this Sideband Inversion stuff? Briefly as a result of a chosen mixing scheme (LO Above) what was transmitted as a USB signal after the mixing process actually becomes a LSB signal in the radio following the mixer. Joel Hallas, W1ZR in QST provides a simple guide. If a Modulated Signal is subtracted from a non-Modulated signal, then the Inversion occurs. 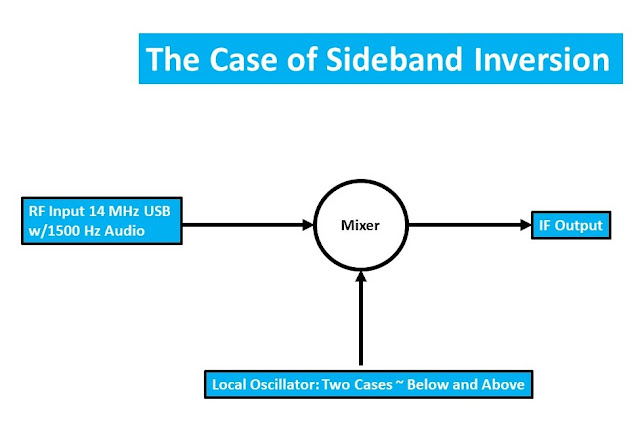 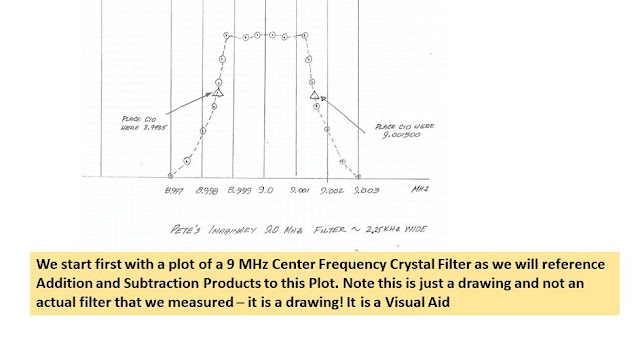 So, now we have this nice graphic but just how does it play with the LO Below and the LO Above. The first important thing to remember is that if signals are to PASS through a Crystal Filter those signals must be within the filter pass band. Any signal outside the pass band will be rejected.
The degree of rejection is dependent purely upon how "GOOD" of a filter it is. This has two aspects (maybe more), but certainly the filter bandwidth and the skirt selectivity, which are driven by the number of crystals in the filter and the capacitance values within the filter assembly. The output amplitude and constancy thereof are driven by the Band Pass Ripple which is a function of the matching transformers.
If you haven't guessed by now this is a highwire balancing act and goes far beyond slapping four crystals of the same marked frequency into a circuit, using five 100 PF caps for the filter caps and a 4:1 matching transformation. Once done you may not be able to declare victory as the perfect filter! If by luck it does happen --then buy lots of lottery tickets as you are indeed lucky. But our homebrew filters need a measured process and not luck to have them function properly.
Let this sink in and then we will graphically look at the LO Above the working frequency and why there is the inversion. Stay tuned. 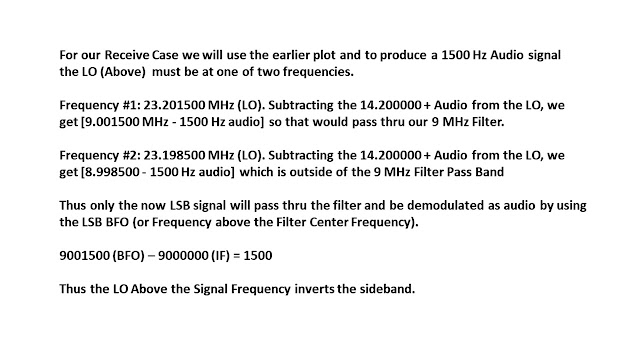 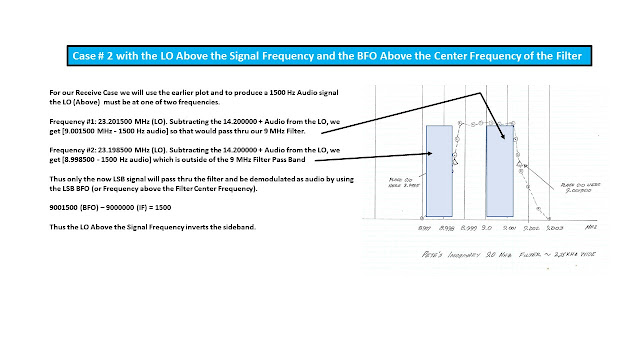 The Case of No Inversion ~ LO from Below 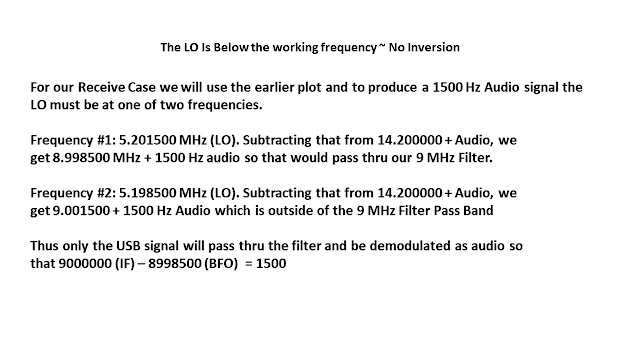 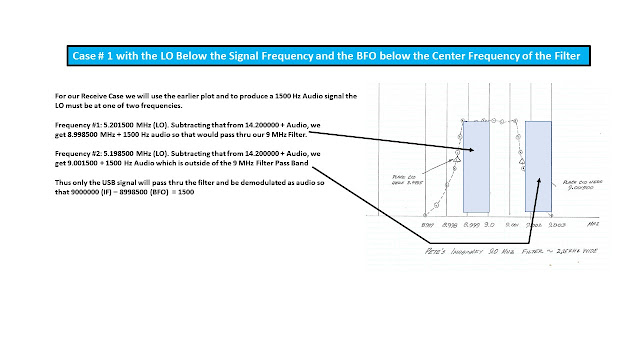 BTW the 2 Band Freebie is a special case where the IF is at 5 MHz and the LO is at 9 MHz. 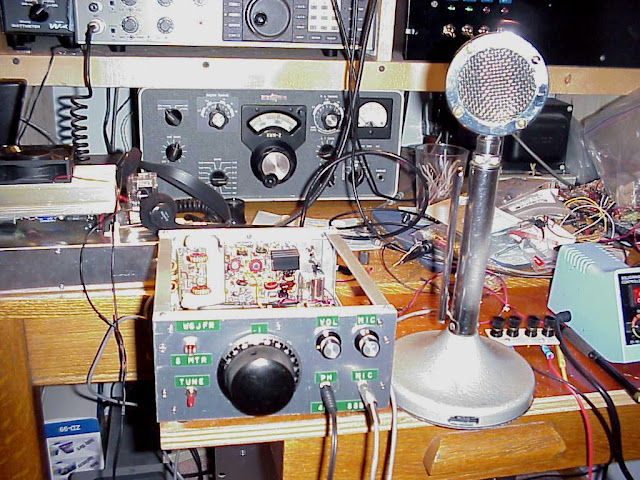 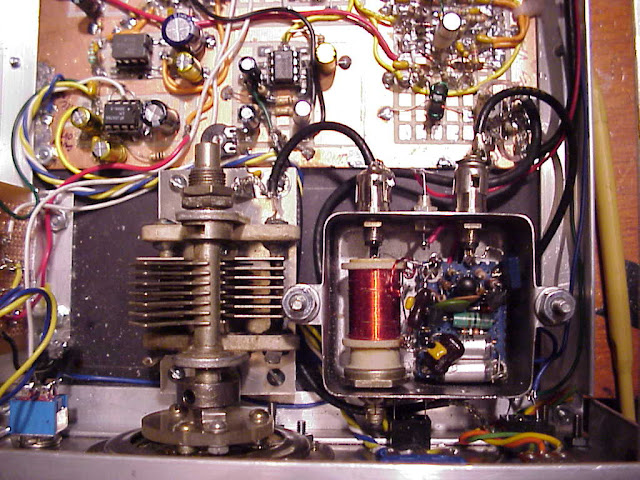 Yes, you are looking at the guts of an Analog VFO built by N6QW (then W6JFR)
A great deal of mechanical alignment was required to install the main tuning cap.
In the old days the homebrewer started by looking thru the Junk Box to see what was there or what could be adapted for use in the radio. In those days you never threw anything away and were constantly on the hunt to add to your parts stash.
Cases were not easy to come by, so you learned how to build a case. In those times mechanical assembly was just as important as the electronics in the box.
BTW I didn't have an S Meter, but I figured how to flash an LED based upon a pre-determined received signal level. So, if it flashed, I could say with confidence you are hitting S9. Look closely at the front panel and see if you can spot the S Meter.
Now the scenario today is like "the only way to homebrew is":
I have been cautioned to be kind to new homebrewers as I seem to offend them. Well like my mother always said --if the shoe fits, wear it.
Back to the question of how to transition that filter into a rig. It all starts with a process and step one is noodling a block diagram. Step one is not to heat up the iron and just start soldering parts. 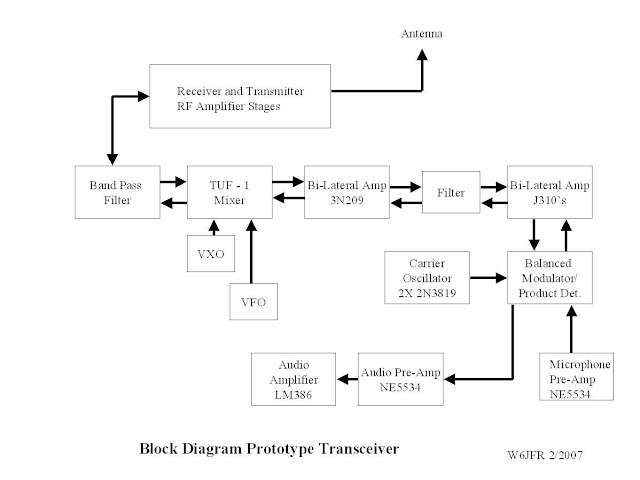 The block diagram also facilitates the board layout in the final build. Yes, that is a 4.9152 MHz Filter in that radio and the LO is from below (runs around 2 .2 MHz). This caused a lot of heartburn as I had to build some brick wall rejection filters to keep the LO out of the BPF.
This is where the LO from above (12 MHz VFO) would have been a better choice. But keeping a 12 MHz Analog VFO from drifting is like trying to entice Mary Jo (HS GF) into the back seat of the 56 VW Beetle. The LO from above would cause sideband inversion and so you would have to find a suitable BFO crystal to work in the radio --assuming the Crystal filter was somewhat symmetrical as that was another hurdle. 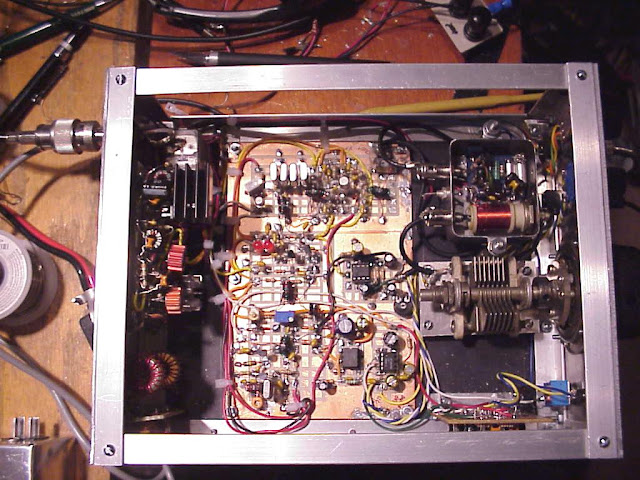