2021 ~ A Year Moving Forward. Strap In! Your Next Rig will be an SDR Based Transceiver!

Time to Smell the New Rose -- An SDR! 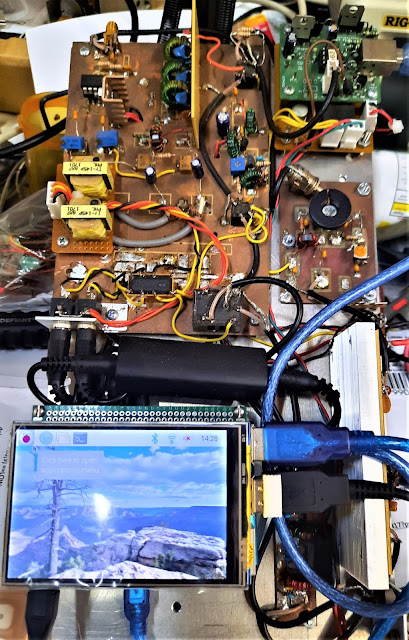 5 Watt, 40M SDR Transceiver -- all on one board!
Several years ago I built The RADIG V.3 SDR that all fit on one chunk of Aluminum; but required an external HDMI display. In fact this was my 2020 back yard Field Day station as shown below. 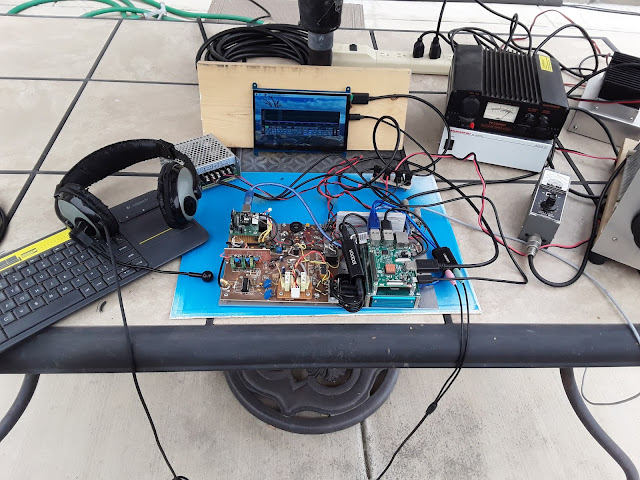 Now with the new display I found it has suddenly shrunk in size in term of the foot print. The 3.5 inch TFT display simply plugs into the Raspberry Pi3 and we are off and running !
Actually I now have two versions of the display. One came as a $23 kit for the RPi4 and the other is intended for the RPi3 and is just the Display (about $15). THERE is a huge difference. The RPi4 version can be used with the RPi3 and is the BETTER choice. Let me explain.
There is a slight difference in the software set up --which is a problem because there is no explanation of what software to use. But some Internet Sleuthing found something the works for the RPi3 version --but it is clunky and has two problems.
These two problems are ONLY with the RPI3 Version. The RPi4 version you can change the screen resolution and also have the simultaneous HDMI. The simultaneous HDMI -- is great when you want to make settings changes as they are hard to see on the small screen.
A good "show and tell" is the photo of the FT-8 screen shown in the March 21 post -- you see the whole WSJTX for FT-8 using the RPi4. But when you use the RPI3 (beacuse of the fixed resolution) you then have what is shown below. Using the mouse you can move the panel around -- but not as good as what you see in the March 21 posting.
So yes get a display; but get the one for the RPi4. If you want the secret decoder ring for the code needed to make these displays work, send me an email to my QRZ.com email address. 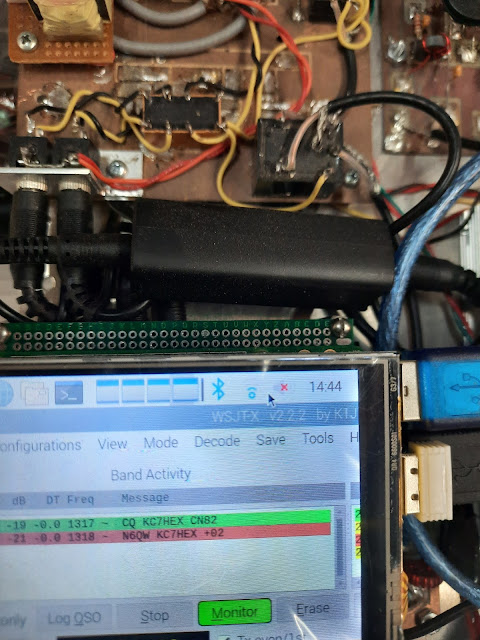 Yes this is a totally homebrew SDR transceiver that is capable of making not only SSB, CW but also WSPR and FT-8 all fitted to a chunk of aluminum.
I have suggested this new form has potential as a chick magnet. Just think out of the burrito box for a moment. You take this rig to a large park, find a picnic table, throw a chunk of wire over a nearby tree branch and just wait for the chicks to come. Wish I had this jewel when I was 18 years old!
73's
Pete N6QW 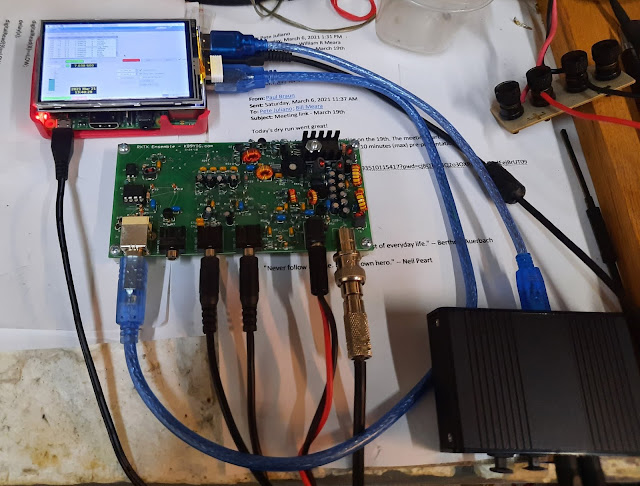 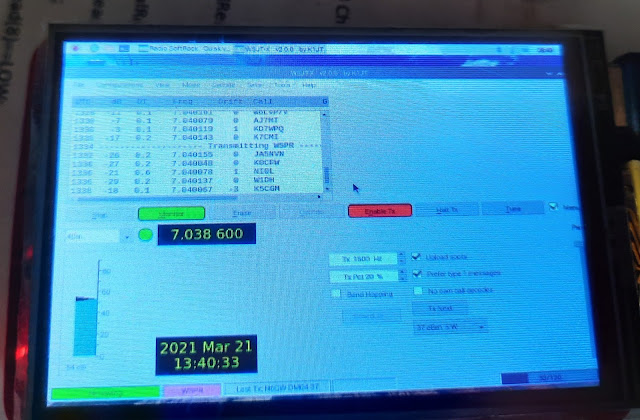 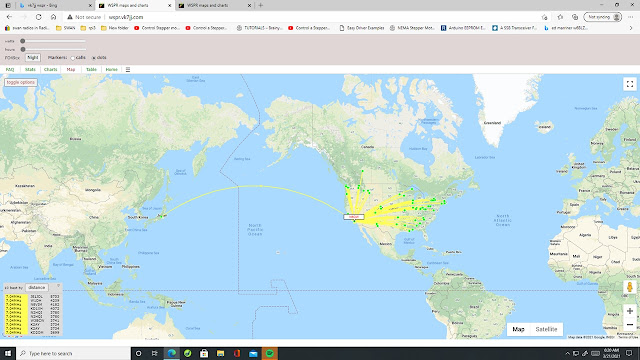 This is a WSPR shot of my Transmitted signal at 1 watt this morning! I was heard in Japan.
www.giovanni-manzoni.com
Visit this website as it contains Six presentations made to ham clubs and organizations. Several are solo and several are with N2CQR.
Pete N6QW

FT-8 using the SoftRock V6.3 ng along with a RPI3 running the latetst OS and the Treedix Display

This is a really small footprint SDR. Imagine this in your shack. You can do it!!!! 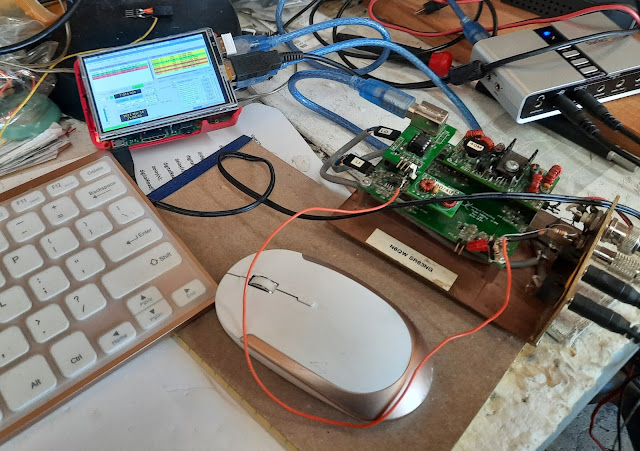 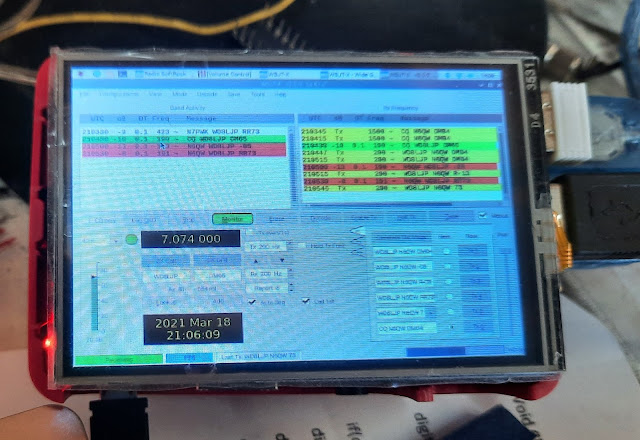 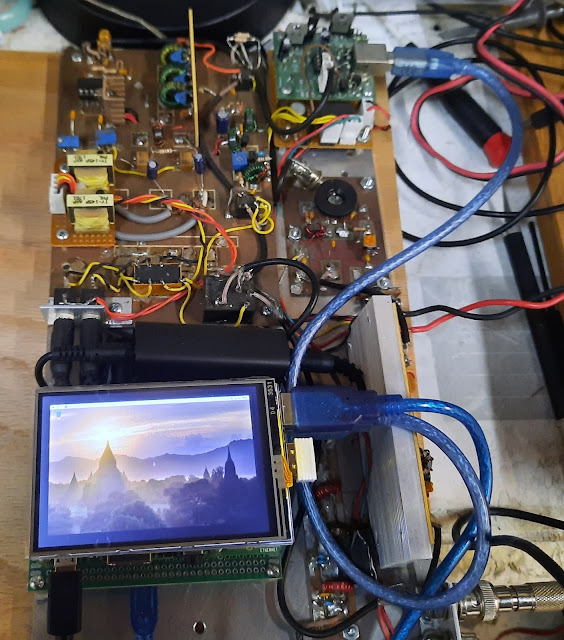 Just as time moves forward, which is unstoppable, so is what is happening within the homebrew community. I know of at least 5 major groups who are working in earnest to deliver a homebrew SDR transceiver including several that will be unveiled before Independence Day. Think of Giants like Bob Larkin (one of the EMRFD guys) and of course Farhan who are dipping their oars into the SDR waters. This takes it to a new level because of who is doing this with their technical expertise and their well known accomplishments.

Below is a slide from a presentation I made this past weekend to the Long Island CW Club. The theme was Roll Your Own Rig! 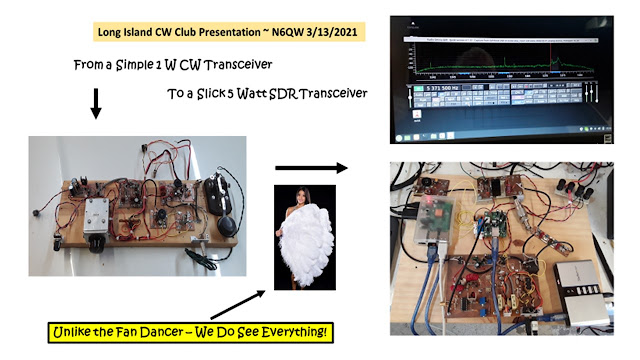 This is the premise of this post. On the left we have a homebrewed CW Transceiver with a superhet receiver including a 3 Pole Crystal Filter and a Crystal Controlled 1 watt Transmitter. All of this goodness is but a few boards on a wooden plank! But it is still limited by a single rock and a single BW of the Crystal Filter. This does not raise the excitement level very much (and it didn't with the CW club).
On the right (lower left) is a 5 Watt homebrew SDR transceiver which also is on a wooden plank and but a few boards. That SDR can do CW and SSB as well as AM, FM and Digital. All this with the magic of a Raspberry Pi3 doing all of the heavy lifting. But much more are all of the extra goodies like a Spectrum Display and Waterfall.
Did I mention all of the filtering options as well as AGC, Noise Blanker (actually 3 Blankers), and a  Notch Filter. The bonus piece includes Split operation, a Record function and 200 Hz CW filter. All this is done with Free software! Did I mention with the Split and using headphones --one frequency in one ear and the other frequency in the other ear --scary!
So why screw with Analog VFO's and  marginal signal handling features, when cheap technology places SDR capabilities in our hands rivaling the commercial boxes, at a far less cost?
So OK no one asked about the Fan Dancer? Actually during the presentation, I would refer back to this slide and taking a note from my graduate studies in Marketing, I hooked the audience with a singular anchor point! In the presentation all I had to say was "the slide with the Fan Dancer" and instant recognition and communication to the audience as to which slide.
Now considering SDR with cheap technology, there is a downside with that approach in that  Hams now have to learn stuff beyond scrolling through 4000 ICOM 7300 Menus. Loading the software on to a RPi3 can be done by a ham with somewhat limited experience. BUT FIRSTLY, you do have to RTFM, (read the manual) and do have to watch some youtube videos. That requires patience plus logical and critical thinking. Many hams today simply want to plug and play, and exercise no effort beside flashing the plastic and awaiting the Amazon truck!
[A note here in the Fan Dancer slide, the wooden plank had all of the clearly visible good stuff but you did have to have a separate display. Now with the Treedix Display it simply plugs into the RPi3 and now that is on the wooden plank too!]
Likely many hams are already behind in that they simply want to ignore SDR and stick with their commercial boxes. Well guys most of the appliance boxes today are SDR as the manufacturers realize where the market is headed and updates and improvements are software driven from the Internet.
Open up one of the new rigs (if you dare) -- you will be surpised to see --there is very little in the way of hardware -- it is all computer chips and SMD components. But more imporatntly it is jam packed with capabilities and possibilities.
The year 2021, as we dig our way (or vaccinate our way) out of the Pandemic will soon explode with many new homebrew SDR efforts and projects.
QST will have a real problem! New ham generated projects will be SDR based and will rival the Commercial boxes the ARRL touts. The offshore advertisers will not like that some ham in Peoria, IL or Peoria, AZ has come up with an SDR that is  cloud based and can be carried to a local Starbucks where "al fresco" they are working the CQ WW contest. This is all happening while sipping on a Almond Mocha, Tripple Latte, Caramel flavored iced-coffee with hardware home built costing about $200. Not a pipe dream; but a reality that time marches on...
73's
Pete N6QW