Moving on to the Simple-Ceiver Project

As a final recap, the new beam antenna is up and running and I am pleased with the results. A real highlight and icing on the cake was on September 27th, 2015 when I finally had an "on the air" contact with Bill N2CQR. Bill and I have fun talking about ham radio "stuff" on the SolderSmoke Podcast but have never had an on the air QSO. This was also a first for Bill as it was the first time he had a HTH (Homebrew to Homebrew) QSO. Bill was running his BITX 20 and I was using the ZIA. What a joy to have the HTH and even better with Bill. See the SolderSmoke Blog for an audio recording of the QSO.

Time to Move on to Radio Hardware

During the course of the SolderSmoke Podcasts Bill and I frequently encourage the art of homebrewing by starting with simple projects such as the Michigan Mighty Mite (M3) transmitter. This project is a functioning transmitter with only 7 parts (well I use 8 --a capacitor key click filter). BUT before actually putting this on the air you need to add a low pass filter which adds about another 5 parts. So with 12 parts you are on the air with a whopping 1/2 watt signal on 80 Meters. One podcast listener emailed us to say that he had built the M3 (M cubed) and now what a about a receiver. Thus the idea was born to come up with the companion receiver that could grow from a direct conversion type to something akin to the W1FB bare bones Superheterodyne. Then the idea has now further grown into developing a book with my able friend and co-author Ben, KK6FUT. Ultimately this project will morph into a functioning SSB transceiver.
We have had many emails both as a result of the podcasts and many of the articles I have written or co-written for QRP Quarterly that typically say I want to build my own rig but don't know where to start. The answer is very basic --start small! Many times the lure of a kit turns into disappointment first because of the cost and second the level of complexity.The M3 is a really good start as it satisfies the criteria of low cost and minimal level of complexity. Now moving ahead to build a companion receiver, this blog will focus on that aspect.
Moving ahead also involves a couple of other changes and we strongly suggest moving the M3 to 40 Meters and the frequency of choice is 7.030 MHz which is the internationally recognized QRP calling frequency. Several suppliers sell these crystals in the $3 to $5 range. [Halted Specialties, ESE and the GQRP Club to name a few.] The other changes involve moving the tank coil to 40 Meters. About 1/2 the turns used for 80 Meters will do it and the tap is 1/3 the number of turns from the bottom. You will also need less tuning capacitance to resonate on 40 Meters. By shifting the frequency to 40M has several benefits including: more activity, a smaller antenna and the possibility of DX running only 1/2 watt.
Thus the companion Simple-ceiver is designed for 40M. There is also another benefit for the choice of 40M as the receiver crystal filter will be on 12.096 MHz which only requires a 5 MHz Local Oscillator to put the rig on 40 Meters. Our intent is to offer at least four options for the local oscillator including a crystal switched VXO, a standard LC oscillator, the AD9850 DDS driven by an Arduino and the ultimate Si5351 PLL also driven by an Arduino. But lets not get too far ahead of ourselves.

The Art of Homebrewing!

The art of successful homebrewing does not start by heating up the soldering iron and cutting off a chunk of solder. That is the last step and the first is to recognize that homebrewing is first and foremost a disciplined process. Our next post will detail that process. But to put you in the homebrew mood here is an example of a homebrewed transceiver during the bread board stage. 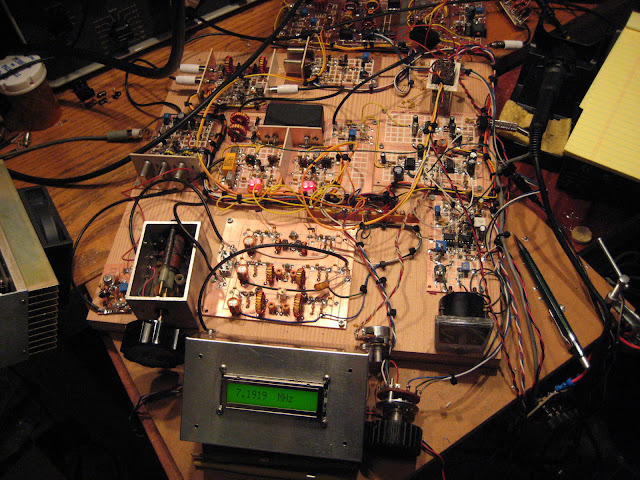