Another Short Diversion from the New Antenna Build

For the last week or so the temperatures in southern California have been inching toward 100 Degrees F. It is just too hot to work outdoors and the next step involves assembling the 2 element Tri-Band beam which of course would be done outdoors. So I have taken a short break from the antenna installation to work on a radio project in hopes that the temperatures get back into the 80's.

So now the temperatures are down But believe it or not is raining --we direly need the rain. But there is so much junk in my garage that the beam can only be assembled out doors so back to the Simpleceiver while I wait for the weather to clear
In the back of my mind I have been thinking about building a simple super-heterodyne receiver that could be easily replicated, has a low part count yet some nice features like a 3 pole crystal filter. In searching my junk box I found some 12.096 MHz crystals which if used with a 5.0 MHz LO would put you on 40 Meters. Another design goal was small (like to take it portable) so some of the circuitry would be surface mount. I have tried several LO's with the receiver including an LC oscillator, a varactor tuned NE602 configured as an oscillator followed by a MMIC RF amp stage and finally the Si5351 using only the Clock 0 output. Below is a Block Diagram of what I call the "Simpleceiver". 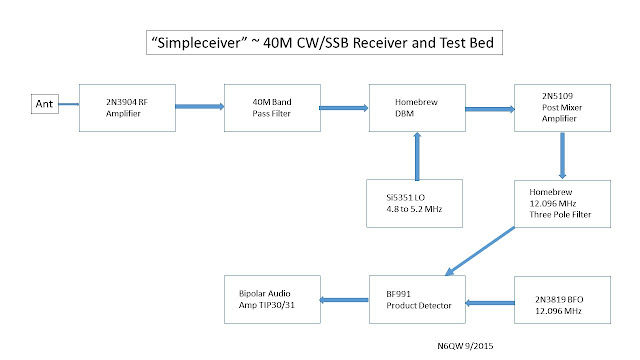 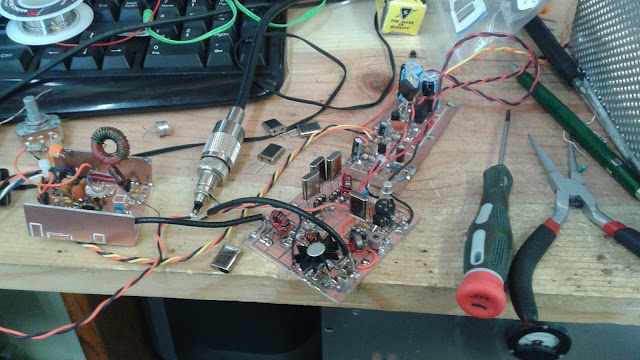 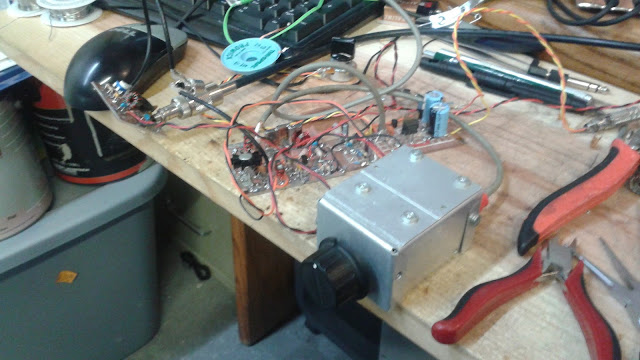 The upper photo shows the Simpleceiver with the NE602 Oscillator and the lower one with the VFO.  A future evaluation will be to switch between the LC VFO and the Si5351.
Unfortunately some well respected members of the homebrew Illuminati community have panned the Si5351 claiming that such devices when used in home brew radios are totally unsuitable arising from the Si5351 phase noise signature. My experience has been entirely different.

I added the second LO where you can switch between the LC VFO and the Si5351. I sure couldn't tell any difference.There will be a new direction for this Simpleceiver which you will hear more about in the future. I am impressed with how well it works with such few parts.
73's
Pete N6QW
﻿
﻿