Showing posts from January, 2016
Show all

- January 26, 2016
Some light at the end of the Tunnel!   My XYL has been steadily improving and hopefully we expect her release from the nursing facility in about a week or two. That means I can get back to heating up the iron and continuing with this project. I have not had any comments regarding those who forged ahead and started work on the transmitter stage and so that either means there is a complete loss of interest or the project is dead. I sure hope not as I think given what I have observed from the receiver performance this project could rival some of the currently popular homebrew radios.   The basic transmitter board had 4 elements including the microphone amplifier, the carrier oscillator, the SBL-1 and the IF Amp/Filter block. The output is of course at 12.096 MHz which is the filter frequency and just so we all are on the same page the Zout is 50 Ohms. The block which will follow the basic transmitter board is the frequency translation board which performs some very specific funct
Read more

- January 14, 2016
N6QW Back on the Blog (at least part time)! A family medical emergency had caused me to stop blogging but that situation is somewhat improving and so I am now back on the keyboard. After three weeks of being turned off, I can see where my soldering iron actually has rust on the tip --that is not good and I soon hope to be soldering some parts on island squares. I might also have to recalibrate the CNC Mill.   Our plan is to now focus on the building the transmitter and then take the next step of configuring the blocks (receiver, transmitter, control and LPF + TR) into a working transceiver. During the last three weeks KK6FUT has built the DCR version and has a you tube video -- it sounds really good as does the superhet Simpleceiver  built by Mikele, 9A3XZ. I do know that others are building portions of the project so if anyone has built either the DCR or superhet variant please let us know.   In moving on the transmitter, it would be well to review the final configuration.
Read more 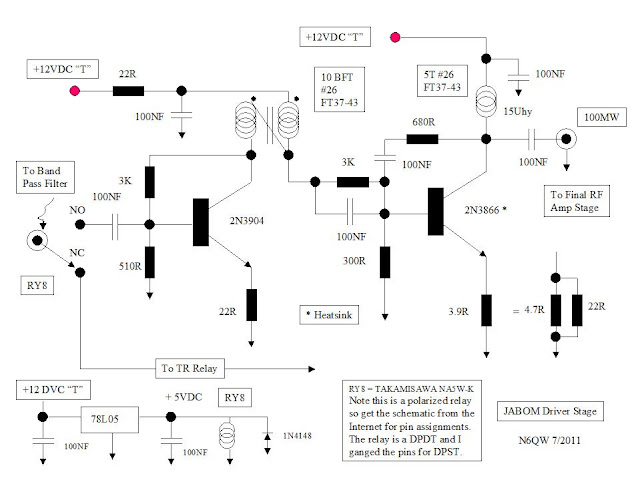 Temporarily QRT @ N6QW     Due a family medical emergency there will not be much coming out of the pipeline from N6QW for a short period of time. However there has been enough information presented to proceed with the transmitter portion. You would only need to add a pre-driver and driver stage plus the final amp and the low pass filter and you are there.   Here are some circuits to consider for the final pieces of the transmitter portion. These are proven circuits having been used in the 2009 Tri-bander, the JABOM and the KWM-4. I strongly recommend NOT using the IRF510 as is the favorite of the BITX crowd but instead put a real RF device in the final amp. For those who want to pick apart the pre-driver/driver check EMRFD for an explanation and specifications of the circuit. The RF Final is my own design and the LPF you can simulate in LT Spice. You will need to fit in a TR Relay and the final integration wiring. If  at this point you are not capable of doing that then I su
Read more
More posts